HOME > MEDIA > JEAN-CLAUDE ELLENA IS THE PICASSO OF PERFUME
RETURN

JEAN-CLAUDE ELLENA IS THE PICASSO OF PERFUME

How do you want to smell? Expensive? Seductive? Mysterious? If it’s all three, you’ve probably already fallen for one of the Editions de Parfums Frédéric Malle. The lush tuberose of Carnal Flower has been wafting from stylish necks since 2005; the elegant Portrait of a Lady has adorned bejeweled wrists since 2010. Now there’s something new for privileged pulse points: Rose & Cuir, ­Malle’s collaboration with Jean-Claude Ellena (pictured above), the celebrated nose who masterminded fragrances at Hermès for more than a decade. Like every Malle must-have, it telegraphs taste and timelessness, but with an inventive twist. 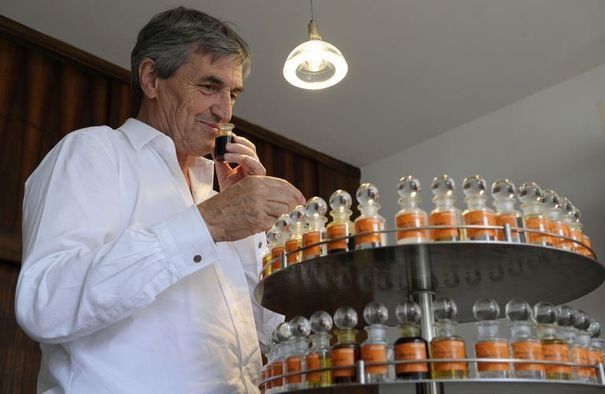 Rose & Cuir’s origin story begins in a verdant garden planted more than 70 years ago by Edmond Roudnitska, the perfumer behind such midcentury masterpieces as Diorella and Diorissimo, outside his Côte d’Azur studio. It was there that Roudnitska first smelled the vivid crimson Etoile de Hollande rose that inspired him to create Rose de Rochas for couturier Marcel Rochas in 1949, and there that, in 2018, Roudnitska’s son Michel happened to wave that long-discontinued eau under the discerning nostrils of Malle and Ellena.

Both men knew instantly that Roudnitska’s vintage floral had given them a starting point for their next collaboration; their last, 2003’s starkly atmospheric L’Eau d’Hiver, is considered an icon of modern perfumery.

“The idea was never to reproduce Rose de Rochas,” Malle says. “But I thought, Wouldn’t it be magnificent to have a rose by Jean-Claude Ellena? It would be like a nude by Picasso. When a great artist does something simple, that’s when the style really pops.”

Malle, a self-proclaimed “publisher” of fragrances, was the first to credit perfumers as authors; Ellena is renowned for his ability to conjure ethereal scents using minimal ingredients. Together they fine-tuned Rose & Cuir over many months. Rose absolute was included, then discarded. So was patchouli. “Rose is a theme for perfumers the way love is a theme for singers,” Ellena says. “The question was, could there be a new way to approach it?”

Thinking of the mistral wind, which sweeps down from the Alps to Marseille, Ellena imagined a fragrance with “a cold, clear freshness that becomes warmer.” The scent opens with bright, citrusy timut pepper from Nepal, a spice Ellena was introduced to by French chef Olivier Roellinger.

“The extract was made specifically for me,” he says. “It’s the first time it’s been used in a perfume anywhere in the world.” Combined with the aroma of precious geranium bourbon, the pepper magically creates a smell that suggests centifolia. Here, with apologies to Gertrude Stein, is a rose that’s not a rose—a flower reinvented.

Ellena describes Rose & Cuir as “more sensual, less intellectual” than anything he has ever done. Grounded in a contrasting base note of leather—cuir, in French—which comes from a molecule not used in perfume for many decades, it’s also darker and more enduring on skin. Yet it’s still patently an Ellena fragrance: romantic and revelatory, a scent that will get you stopped on the street.

“Great perfumes, like paintings, feed you with their energy,” Malle says. “To me, Jean-Claude is like Matisse. He needs only to give you a line, and you know in an instant that he’s the master behind it.”

NEXT : ARTIFICIAL INTELLIGENCE CAN NOW CREATE PERFUMES,EVEN WITHOUT A SENSE OF SMELL

PREVIOUS : WHY BUSINESS STRATEGY NEEDS TO BE MORE THAN PERFUME